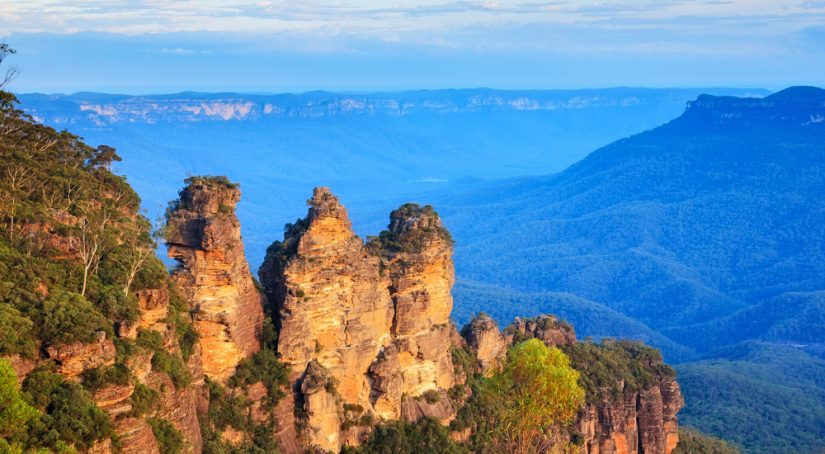 One place you must visit when taking a tour to the Blue Mountains in Katoomba is the spectacular landmark of the Three Sisters, which can be viewed from Echo Point, about 25 km from the Great Western Highway New South Wales.

This iconic attraction, visited by millions of people each year, is an unusual rock formation that, according to Aboriginal legend, represents three sisters that were turned into stone for disobeying tribal law that forbade them to marry three brothers from the Nepean tribe.

The sheer size of this incredible site is awesome to behold even without unravelling some of the most important information surrounding the fascinating story of the ill-fated lovers of long ago.

If you are not already itching to see it for yourself, you will be after reading this.

Some Interesting Facts About the Three Sisters

What is the Myth Behind the Legend of The Three Sisters?

The captivating Aboriginal dream-time legend relates the story of three beautiful sisters of the Katoomba tribe and the myth of how they got there.

The story is about how three sisters of the Katoomba tribe, Meehni, Gunnedoo, and Wimlah who lived in the Jamison Valley, had the ill fate of falling in love with three brothers from the Nepean tribe who wished to marry them.

Unfortunately, Katoomba tribal law forbade anyone from marrying someone from the Nepean tribe and therefore the three sisters and three brothers were not allowed to get married.

This upset the brothers from the Napean tribe so much that together they plotted to kidnap the three sisters by force without consent from either tribe. Their actions started a major tribal war between the two tribes.

To protect the sisters from harm, a Katoomba witchdoctor took it upon himself to cast a spell that turned them into stone as protection until the battle was over.

His plan was to reverse the spell after the battle but unfortunately, he was killed during the battle. Unable to be turned back into flesh again, the three sisters were captured in stone forever.

Still beautiful in their rock formations, the three sisters are a reminder of lost love and the great battle that took place there between the two rival tribes.

An alternative legend exists that tells a different story. It goes like this:

Long ago there lived three sisters, Meenhi, Gunnedoo, and Wimlah, who were members of the Katoomba tribe. Their father, Tyawan, was a witch doctor who loved his three daughters.

In a deep hole in the Jamison Valley there lived a Bunyip who was feared by all. It was considered very dangerous for anyone to pass by the hole where the Bunyip lived.

Whenever Tyawan had to go past the deep hole in the valley to search for food, he always left his three daughters safely behind a rocky wall on the cliff.

One fateful day, while waiting at the top of the cliff, a centipede suddenly appeared, frightening Meenhi who threw a stone it. The stone rolled over the edge of the cliff into the valley below, angering the Bunyip.

The rocky wall on the thin ledge behind the sisters began to split open, leaving the terrified girls stranded at the top of the cliff.

As the Bunyip emerged from the valley and approached the three sisters, all the animals, birds, and even the fairies became stock still. To protect his daughters from harm Tyawan turned them into stone with his magic bone.

Angered by this, the Bunyip chased after Tyawan who turned himself into a magnificent Lyrebird to avoid being trapped and in the process dropped his magic bone.

Once the Bunyip disappeared Tyawan went in search of his magic bone, which was never found.

Since then, Tyawan has been searching for his lost magic bone and his daughters have remained in stone, silently watching over the valley in the hope that one day he will find the bone and turn them back into flesh again.

If you listen carefully you may hear the sound of the Lyre Bird as Tyawan continues his endless search.

If you are planning to visit the Blue Mountains, look no further than FJ Tours Day Tours.