What Is The Most Interesting Thing To Do And See Near Sydney? 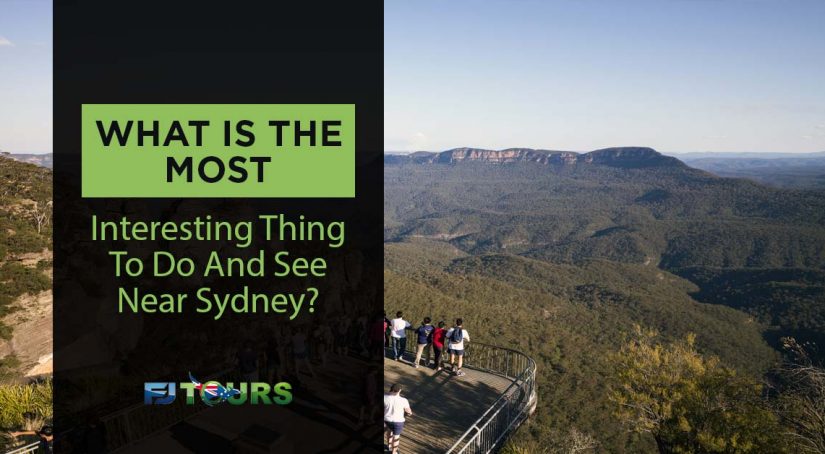 Be enchanted by the vista of a blue horizon of eucalyptus trees that seem to stretch on forever and marvel at the spectacular rock formations that hide mysterious underground caves.

You can set out on one of the many walking trails that stretch over 140 km while listening to local Aboriginal guides relating the Dream Time Stories of the Aboriginal people.

By night you can retire to a luxury retreat surrounded by wilderness if that takes your fancy.

With all of this in mind, following are some of the top attractions in the Blue Mountains:

The Ruined Castle of the Blue Mountains

The famous rock formation called ‘The Ruined Castle’ in the Jamison Valley can be reached by walking along a track starting from the ‘Golden Stairs’ down to ”Narrow Neck Plateau’.

This is situated on the south-west side of Katoomba and from there south-east to Mount Solitary on the lower slopes.

While millions of tourists casually gaze across the Jamison Valley at the Ruined Castle, not many realise the significant link it has to the creation of the town of Katoomba.

This is due to the high-grade oil shale beneath the rocky pinnacle where a mine once operated.

It inspired the construction of an aerial ropeway across the valley and a tramway that to this day forms the basis of a walking track.

Although this is a popular spot for bushwalkers, the thick undergrowth in the area makes it quite challenging to explore the remains of the region’s mining past.

Set out on foot along one of the many well-marked walking trails to explore the native bushland, waterfalls, streams, cliffs, and forested valleys of the Blue Mountains.

While it is possible to take many of the walks independently, if you are unfamiliar with the weather conditions and the region, it is best to join a guided tour.

If you prefer an easier trip you can spend the day on a hop-on-hop-off Blue Mountains Explorer Bus with 29 stops, including the major attractions around Katoomba and Leura.

On the Blue Mountains Walkabout tour a local Darug guide will help you discover the rich heritage of the Aboriginal people in the area.

The Three Sisters of the Blue Mountains

One of the most visited sites is the Three Sisters that is believed to watch over the traditional land of the Gudungurra, Darug, Dharwad, and Wiradjuri peoples.

According to an Aboriginal legend, the three pillars of rock were once named after three beautiful sisters, Meehni, Gunnedoo, and Wimlah.

These sisters were once, long ago, turned into stone by their powerful tribal leader.

The top of this dramatic rock formation can be reached by walking trail via Honeymoon Bridge but it is best viewed from the Echo Point Lookout.

While at Echo Point you can pay a visit to the Waradah Aboriginal Centre to learn more about the formation of the Three Sisters.

An outdoor holiday to the Blue Mountains won’t be complete without a visit to Scenic World at Katoomba.

Here you can ride across Jamison Valley on the Scenic Skyway Gondola and take in the breathtaking views of Mount Solitary and the Katoomba Falls.

It is also the home of the world’s steepest incline railway pass, the Scenic Railway, that descends almost four hundred metres down the escarpment.

The thrilling Scenic Railway ride passes through a gorge and long tunnel before ending on the valley floor.

Situated about a two-hour drive west from Sydney, the Greater Blue Mountains area is best explored by car but you can also get there by train or coach tour.

Sydney airport is only about one and a half hours east of the main town of Katoomba in the Blue Mountains.

If you are planning to visit the Blue Mountains, look no further than FJ Tours.